TIME Magazine is the latest media outlet to vilify teachers. The Nov. 3rd edition conveniently snipes at teacher tenure, while giving corporations the nod. How much money did they get, you have to wonder, to show the gavel hitting the apple? And gavels should be what they fear. A lot of places are starting to wise up to the fact that it will take some court action to put education and teaching back on track. Letting corporations take over America’s public schools isn’t going to be a cake walk. Maybe they’ve figured that out. 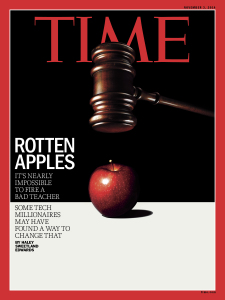 The larger question, I wondered, is why do people hate teachers? Well, I began reviewing the literature, and, based on what I read, and, what I know personally, I have decided that people really don’t hate teachers. They may have had a teacher, or a couple of them, that weren’t very good or who really were unkind, and they don’t like those teachers. But most people don’t condemn a whole profession just based on one teacher, like you don’t usually blame the whole medical community when a doctor fails to cure you or your loved one. In fact, I know many parents who adore teachers! They support them every day!

In general, teachers used to be well-respected. High school students often considered teaching a reputable career. The venomous propaganda against teachers began 30 years ago when a group of business elites and politicians decided to privatize public schools. Up until then, teachers had a difficult time of it, but they were still pretty much esteemed. Then, those in power, bought into the corporate message and the Milton Friedman belief that privatized was better.

The hatred for teachers today is the result of years of overall maligning by media sources. For example, for years the Phi Delta Kappan Gallup Poll indicated that Americans liked their own public schools, but they didn’t think public schools in general were very good. Why would people think that way? They believed what they heard and read. They bought into the propaganda!

Teachers were also blamed for students not doing well, which was never the case. Students throughout the years have made steady progress, although schools are so obsessed now with unproven standards and testing that there is a real threat to future student achievement.

The teachers’ unions, both the AFT and the NEA, in trying to show good faith, have attempted to do what corporations want them to do, to build so-called partnerships, so the public will see them as cooperative. Unfortunately, this has backfired. It has made teachers look weak.

The public has taken it to mean that the corporate CEOs and venture philanthropists know better than the teachers. And while those CEO partnerships with the unions cover everything from Teach for America, charter schools, Value Added Measurement, and Common Core State Standards the venture philanthropists really want a for-profit system and complete control of our schools and children. Ultimately, my guess is they want every child in the country sitting online at home or at a Rocketship charter. That will make money for some and it will mean the loss of the public’s voice and control of a democratic public school system for all the rest of us.

Throughout the years this message of teacher hate has permeated through every community doing great harm. Qualified teachers, who excelled at their craft, have left the field. Young people who would have made wonderful career teachers have gone into other fields or are without jobs.

Teach for America (TFA), a group that produces rookie teachers without much preparation, creates a turnaround system of low-cost teachers that looks more like a Peace Corp venture for a 3rd world country than a strong participatory democracy. More recently, TFA have taken real teacher jobs after schools are shuttered and made into charter schools. This is a cheap solution to the real education needs we have in this country.

The war against teachers and public schools isn’t, like what you always are told, a war for the hearts and minds of the children. It is war about money. Who will profit and how will they save on teachers in order to make out big at the top. I have faith, that sooner or later, people are going to tire of this and want to return to the good ole days of public schooling, only better. We already see this happening with the pushback on testing, Common Core State Standards, with teachers fighting for their jobs, and parents of students with disabilities who want something better, not less.

Hopefully, soon, our teachers’ unions will hand back corporate tainted money and speak out stronger for the teaching profession that American students need. They will not partner with such individuals unless they are actual participants in the conversation. And we will push corporations out of the classroom, where they know nothing about children and their development.

It really is true that all other professions spring from the teaching profession. Americans should be worried that the loss of real teachers will create a weak society and students who truly are unprepared. Instead of vilifying, isn’t it time we start valuing America’s teachers? Shouldn’t we be about showing teachers support for the difficult jobs that they do?

But in the meantime, speaking of money, all you teachers out there, for those who could afford them, I’d immediately cancel my subscriptions to TIME for Kids and TIME Magazine. Also ask for a refund. There is no need to support publishers who think you fail when you buy their product and use it to instruct children. I’d say it is probably biased news anyway.

@DianeRavitch @carolburris @marla_kilfoyle @Network4pubEd @NPEaction @NancyEBailey1
PEP concurs with @MassPolProfMo - we must stand up for a real education for all our children, not the white(wash) backlash being promoted by phony AstroTurf fronts.

The Pictures Children Take of Their World - https://nancyebailey.com/2021/08/01/the-pictures-children-take-of-their-world/ on @NancyEBailey1

What kind of pictures are children taking? We cannot control all the news, but as adults, how can we help improve what they see & make their lives happier and safer? https://nancyebailey.com/2021/08/01/the-pictures-children-take-of-their-world/

Asking public school teachers and administrators...have your building ventilation systems been improved over the summer? Are your windows now in working order? I am hoping the answer is YES! @SecCardona