Last week on FOX News, Host Lisa “Kennedy” Montgomery said, “there really shouldn’t  be public schools  anymore.” Before Democrats could shake their heads and say, “Those silly Republicans,” Steve Benen on The Rachel Maddow Show Blog, referencing Lisa’s statement, said, “what was once an unheard of idea is slowly becoming a little more common. For education proponents, this isn’t good news.”

Put this together with the proposed anti-public school changes under the reauthorization of the Elementary and Secondary Education Act (ESEA), Minnesota Republican Rep. John Kline’s  Student Success Act (H.R. 5),  one wonders if we are witnessing the last rites for America’s public schools.

Well, I’m not going to buy a black outfit anytime soon. I still believe in the strong voices for public education that can readily be found on social media. Like the students in Newark who staged a sit-in last week to oppose the draconian school reforms of Superintendent Cami Anderson. Or the parents in Germantown, Tennessee who nobly attempted to change, based on well-grounded research, the morning start time at their local high school. And there are many parents and teachers pushing back high-stakes testing and charter school takeovers.

Step-by-step Americans are fighting for their public schools.

However, the proposed changes to the ESEA (changed to No Child Left Behind under President G. W. Bush ) should raise a lot of questions. The Student Success Act is troubling for many reasons. And the bill is set for a vote already this Friday by the House of Representatives.

The bill focuses on limiting the federal government’s role in education, giving states and local education associations more power. Certainly the Feds have not been kind to public schools—pushing charters, “rigor,” faux teacher programs and Common Core. And the Department of Education is filled with people from the Gates Foundation, and others, with no experience working with children. A lot of people also don’t like Arne.

But states have been ruthless in forcing on schools the same national reforms. Governors signed off on the Common Core State Standards. They have pushed draconian heavy testing and unproven Value Added Measurement for teachers onto school districts. Why should we believe states will do things in a more reasonable fashion if this bill passes? How pro public schools are the likes of Governors Scott Walker, Bill Haslam, Andrew Cuomo, Rick Snyder, Rick Scott, Bobby Jindal and Chris Christie? And really, the Federal, State and LEA should all work together with a balance of control. The Federal government should support the state and LEA–not dictate mandates.

And speaking of Common Core, in the new Student Success Act, while Common Core is mentioned in the bill, and not glowingly, what really will happen with Common Core State Standards? States that have embraced the standards most likely won’t get rid of them.

By the way, I don’t think the loss of the arts in public schools is addressed. Without the arts, and a variety of other subjects lost with NCLB, public schools will continue to not be whole schools. The arts were supposed to be included in NCLB, and why they were removed from poor schools should be investigated. The new bill, with all that equality and closing the achievement gap talk, should address the arts.

The reauthorizers  also want to pass more control to the local education associations. This is tricky. Good public schools rely on well-run school boards, and without them public schools really could cease to exist. And a lot of politicians and policy wonks who want school privatization would like to see the end of school boards altogether. Here is a recent example in Little Rock where the state took over.

But many LEAs are now more involved with outside interests. Ask yourself if you like what your local school board has done for public schools where you live. My guess is your answer is probably no. Somehow this country needs to get back to school boards which represent the local constituents. We need better school boards, but until then, we should be wary of giving them more power.

Assessment. It still sounds like a lot of testing, and what about PARCC and Smarter Balance? How do they figure in? Will state and the local school school districts drop those tests when so much money has already been poured into them? Are they really going to start all over? I wish they would, but I find it hard to believe they will.

The bill criticizes the NCLB Highly Qualified Teacher requirement as relying solely on an educator’s credentials. The HQT originally caused quite a lot of confusion, but I hardly think it was to promote teaching credentials in a good way. And the current idea promoted here, that teachers should be judged according to how they improve student achievement, is worrisome. It is back to VAM.

Also, many fast-track programs to make teachers are proliferating across the country. Loosening credentialing requirements raises serious questions. What other profession would permit this?

The bill’s support of charter schools and vouchers is a huge threat to traditional public schools. States and LEAs will be allowed to divert funding from programs for English language learners and low-income students. Telling parents they will be in control of their schools if they have charters or a voucher is deceptive. There is no proof charters and vouchers are better than traditional public schools. Many reports have come out recently to show this. So why is this bill supporting them? Getting rid of school improvement plans also sounds like a step in the direction of privatization. There doesn’t seem to be anything about charter school or private school transparency.

The bill will also lessen the chance that class sizes will be manageable.

So are these reauthorizations meant to end public schooling? Probably. But my guess is a lot of folks won’t let them.

I have signed a lot of petitions and written some letters in the past. Sometimes it seems to matter and usually it doesn’t. But this is a serious bill and it was worth it to me to sign against it. If you would like to as well go HERE.

And if you start to even consider whether it is fine to contemplate giving up on public schools, just cut this sign out and stick it on your bulletin board at home.  Courtesy of the BATS. 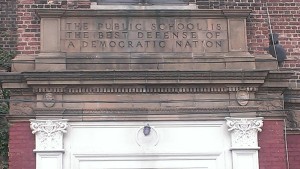 In the U.S., someone always has a “solution” to the problem of public edu for Black, poor, Indigenous and Latinx/o kids that benefits a minority of them and does zippo for the vast majority. Rarely do we hear we should just educate all kids like we do the wealthy.

Schools are not stores and students are not customers. Nor should schools, a public good essential to democratic governance, be run like businesses. Most businesses fail. We can’t allow that for education. https://twitter.com/drstephentracy/status/1466609653794623491

@nrookie @nhannahjones The charter schools are not bankrupting anything. The districts are suffering the consequences of having lost the confidence of their own customers. Welcome to the real world.

46 years ago in 1975, the Individuals with Disabilities Education Act (IDEA) was signed into law giving all students access to the educational opportunities they deserve.

So thankful everyday I get to be a special education teacher❤️