Here are some observations of Betsy DeVos and her Rethink Schools tour.

One of the schools she visited was the Firefly Autism House the private school which received attention in the landmark Supreme Court case Endrew F. v. Douglas County School District. Parents received funding to place their child at Firefly due to declining special education services in Douglas County Schools.

Many children with autism still attend public schools in Douglas County. Are they improving special education services in those schools?

Why were special education services allowed to get so bad that parents had to go to the Supreme Court to get a private school to address their child’s needs? As education secretary that’s the question DeVos should be asking.

Betsy DeVos pretends to be concerned, but she has no answers. Her goal is school vouchers, so she thinks about other things.

When Betsy visited schools in Wyoming she said:

However, children affected by Harvey and Irma, who have damaged schools, if a school at all, probably wish they had their old schools back.

Most public schools, supported by adults who care, are a source of pride for students and parents. Children thrive with consistency in their lives. They like to visit their old teachers and appreciate routine. It provides them security in a troubled world.

Even parents love their old schools and are often thrilled when their children get to attend the same schools. They especially like it if their child gets the same teacher they had in school!

Consider Betsy’s seating arrangement criticism. She said Most students are starting a new school year that is all too familiar – desks lined up in rows, their teacher standing in front of the room framed by a blackboard.

But private and parochial schools are set up like public schools. Students sit in rows of desks in those schools too!

Children more often sit at tables in public schools. They often sit with the teachers who work with them.

Betsy would like to get rid of public schools altogether! She’d like students to stay home and sit at computers for all of their schooling. Or they could work at museums or libraries, or anywhere–without real teachers!

She thinks parents would prefer a charter warehouse with rows of bright colored carrels like the picture below. Facilitators will help children stay on task.

Or sitting at computers in rows of desks. 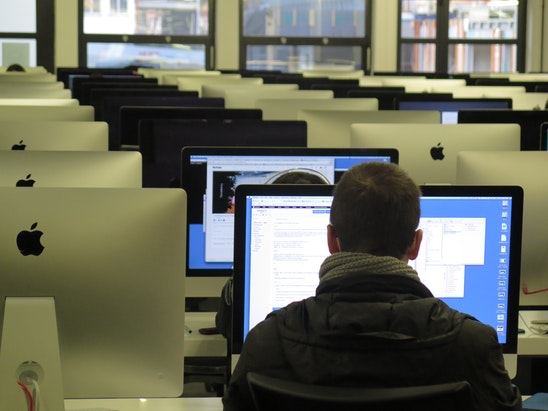 Betsy continues to lament, They [students] dive into a curriculum written for the average student. They follow the same schedule, the same routine – just waiting to be saved by the bell.

But Betsy forgets it’s her friends in high places who pushed a one-size-fits-all curriculum into public schools in the first place.

For the record, most public school teachers still manage to create lovely classrooms and teach the way they know best.

One School She Visited

DeVos visited the Woods Learning Center. It’s a public school, but there is no principal. It’s “teacher-powered,” which means teachers supposedly do their own thing.

The teachers at the Woods School apparently don’t like having a principal. But principals can be great to organize the school and keep things running smoothly. When they aren’t pressured to push awful reforms onto the backs of teachers—they’re good people.

I’m not sure how getting rid of a principal can be seen as innovative.

Multi-age Classrooms are Nothing New

At the Woods School teachers move around with their schedule and have multi-age classrooms. If DeVos did her research, she’d find that public schools have done this in the past too. Multi-age classrooms aren’t anything new.

The school has an eerie connection to personalized and project-based learning–technology. The primary teachers believe that students learn best when they construct their own learning and they work hard to create well-rounded learners by teaching to the whole child.

It doesn’t sound like they are talking about play here.

Betsy DeVos also visited the St. Stephen’s Indian school. She had a photo op there. They gave her a pretty quilt. And she visited the Air Force Academy.

The sad fact is public schools should always improve and be on the cutting edge of innovation. But schools are moving backwards.

Betsy DeVos is doing nothing for public schools other than pushing privatization for her “stakeholder” friends, especially those in the tech industry.

Getting rid of public schools altogether by squeezing resources from them and running teachers out, pushing students into religious schools, and replacing teachers with technology–those are her goals.

We really don’t need her to go on a tour to understand that.

"Phonics is important, especially when children have reading disabilities, but it shouldn’t stand alone.” @NancyEBailey1

Children have to understand why they're doing phonics. If they're not given free reading opportunities or chances to choose books they like, why would they care about reading? There has to be a connection between phonics and books. https://nancyebailey.com/2022/01/25/10-ways-to-help-children-enjoy-reading/

If Michiganders crave rule by the wealthy, they can sign the DeVos campaign’s papers. But if they want to keep public schools public and uphold democracy, they need to reject the Let Mi Kids Learn petition. https://www.freep.com/story/opinion/contributors/2022/01/23/dark-money-michigan-school-privatization/6607804001/?fbclid=IwAR19xqHSzTjGKBF-ePjJkP9Du8fT_TDw5y5uOUkw1zrBeX2A8accsMo47Bk

It has already been established the VAM model of evaluation is "arbitrary and capricious" Why are you trying to bring back a failed evaluation system to VA. @Dunnavant4VA @GlennYoungkin #VAranked4thinNation SB384