Education Secretary Betsy DeVos was asked about President Trump’s ugly “Pocahontas” comment. She said, “I think the president continues to lead in an important direction in our country, and I think that we can all do well to reflect on the things we say before we say them.”

But if you are a parent or teacher, how do you deal with the President’s bullying behavior? DeVos has never worked with children or teens, so she doesn’t understand what a dilemma the President’s behavior presents.

How does one teach that hatred and bullying are wrong, when children see the President being permitted to display such conduct? Why isn’t such behavior an impeachable offense?

President Trump demonstrates bullying on a daily basis! Whether he is calling Sen. Elizabeth Warren “Pocahontas,” presenting a video of slicing a golf ball into the back of a woman getting on a plane, who is supposed to be Hillary Clinton, disparaging women, making fun of a dangerous dictator, supporting hate groups, or mocking an individual with disabilities, his behavior sets a terrible example for children. 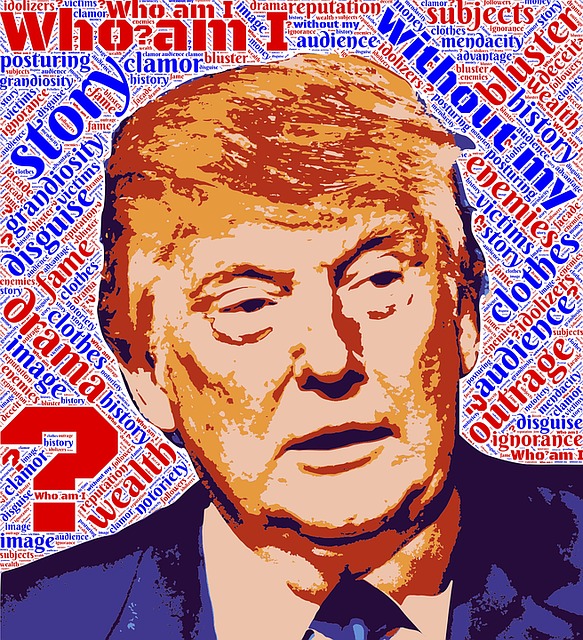 His condemnations have often been racist and sexist. They are dangerously immature. His rants often involve violence.

Bullying has always been a problem in schools, and not just public schools. Private schools are not immune to bullying.

Cyberbullying is a relatively new way to bully and is just as cruel if not more troubling than face-to-face bullying. Learn more here about cyberbullying.

Last October, NPR’s Anna Kamenetz reported that the “Trump Effect” didn’t look like it had increased bullying in school. Bullying and cyberbullying were down somewhat from a 2013 study.

However, her report on bullying was before Donald Trump was elected President.

The Southern Poverty Law Center looked at both pre and post election effects of Trump bullying based on K-12 teacher reports of bullying. The information was not scientific, still, it is important to consider. The report from last February showed:

Incidents were reported in nearly every state. The largest portion (323 incidents) occurred on university campuses or in K-12 schools. The incidents were dominated by anti-immigrant and anti-Muslim incidents (together, 329), but included ones that were anti-black (187), anti-Semitic (100), anti-LGBT (95), anti-woman (40) and white nationalist (32). A small sliver of them (23) were anti-Trump, but the vast majority appeared to be celebrating his election victory.

Hatred drives people apart. Bullying often breeds more bullying. Social media is replete with angry rants back and forth. It’s important to remember that with all of this bullying, children and teenagers are watching adults.

Bullying hurts. It has driven some young people to take their own lives. One never knows if bullying will be the last straw for someone who struggles with other problems.

It is important to remember that those who bully have difficulties too. They could be insecure or scared. They might have bad manners or psychological problems.

The President seems to think bullying is necessary to pick on those who don’t think or believe the way he does. This is difficult for us to understand, because we think of Presidents as confident and secure in their abilities.

How do teachers and parents teach children that bullying is wrong when you have a President who continues to bully?

Here are some suggestions.

Make it clear that bullying is wrong.

Those who support Donald Trump’s policies, need to separate their support from the bullying behavior. They need to let children know that the President is wrong to bully others.

For example, one could say, “I do not agree with Sen. Elizabeth Warren, but I wish President Trump would not bully her. Calling her names is unkind, and he should stop it.”

In that particular incident the focus should be on the honor given the Navajo World War II Code Talkers. What did they do? Why were they honored?

In other words, switch the emphasis from the bullying behavior to focus on something informative and honorable.

Recess must be restored to every public school. That fight or argument on the playground may seem troubling, but it also helps children work out their differences.

Middle and high schools also need to include ways to engage students and provide opportunities for socialization.

Even young children understand their parent’s political leaning. Learning that a Trump or Clinton supporter may differ from you politically, but that they are still nice people, is critical.

Put Away the Digital Devices in School

Social media might help us to connect with others in faraway places.

But in school where children gather, face-to-face engagement means everything.

Students need to be able to talk out their differences and debate the social issues of our time.

In large classes, students are lost.

Students who display behavior problems, using President Trump as an example for why it is O.K. to bully, probably already needed help with their behavior.

Most teachers are good at spotting and addressing bullying behavior. If the bullying doesn’t stop, students might require counseling.

Politics is interesting. Children, if they are old enough to understand, usually like to discuss current affairs. They need to be permitted time in school to do this.

Most students follow the political party preference of their parents. Let children know that having different beliefs doesn’t mean we can’t find common ground or still be respectful.

If a political discussion is planned in school, inform parents. Always explain a project clearly and put things in writing. Get a parent’s approval.

Celebrate different cultures in school. Let children do artwork surrounding the cultural theme. Put on plays. Bring in food and invite parents to the festivities.

We are more alike than different. But our rich cultural differences make our “melting pot” country the special place that it is.

Teachers shouldn’t shy away from discussing the President’s bad behavior. Use his bullying to discuss weakness in people.

What makes a person bully another person? How does it feel to be bullied? Why do you think the President bullies others? Use real examples.

This will make some cringe, but also try to find the good points about the President. Help children understand the difference between good and unacceptable behavior.

For example, the President should not have called Sen. Warren Pocahontas, but he was very proud of the Navajo World War II Code Talkers. He appeared to treat them personally with respect at the event, aside from the ugly statement.

Finally, I wrote this to make the best of a lousy situation. What we all hope for is a President who quits the childish twitter attacks and quits bullying. We want a strong leader who supports all of us and recognizes the needs of the poor.

His current behavior is problematic and brings down the Presidency.

But, in the meantime, we can’t stop students from learning and growing. The rest of us must lead children through these acrimonious times by displaying the respectable behavior we wish them to have as adults.

We must help children not to just have tolerance for one another, but to be interested in the unique differences that make us human.

Your thoughts are welcome.