Angela Duckworth graces the Costco Connection this month talking about the character grit that she says made her who she is today. She wants America to teach children to have grit too, so they will be successful. She has a Grit Scale. HERE. And she runs a character lab.

Her grit goals for children include the following:

For starters, grit is a repackaged idea. If you’ve read The Little Engine Who Could by Watty Piper to your child, you’ve taught them to try their best. Many children’s books incorporate the idea of endurance. It’s a timeless virtue. 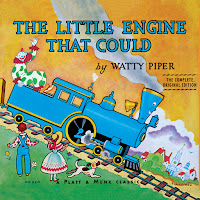 Teaching character traits like perseverance through children’s literature seems more meaningful, and enjoyable, than browbeating students to carry through on every task to prove their stamina.

Picture books and books in general teach values children can internalize in a meaningful manner. Children face many opportunities to demonstrate persistence. They don’t have to always complete a task.

Teachers Know When to Help Children with Perseverance

The grit issue goes to the heart of teaching. Good teachers encourage students to try their best. If a teacher is discouraging your child, make an appointment to discuss it soon!

Teachers and parents also recognize when a child becomes frustrated, when a task might need to be dropped for good, or put aside for later.

Making that determination, when to encourage, when to back off, when to change, defines good instruction.

Duckworth’s grit can be found in the harshly run KIPP charter schools. Telling poor children they must display grit to succeed is particularly controversial and reminiscent of the “no excuses” mantra pushed on children with NCLB.

It’s a damaging message to the child who fails—who can’t reach a goal put before them. It’s unfair to a student with life circumstances that make learning difficult.

KIPP is also known for its punishment. Not all children demonstrate the grit expected of them with adult demands.

Pushing a child with learning disabilities to have grit can be especially detrimental.

There’s a disability called “perseveration” where students get stuck on a task. They can’t easily hop off the Ferris wheel. If the work is not helping them move forward, it’s redundant and ineffective.

Don’t confuse this with holding high expectations, which are important. But high expectations should also be reachable. Knowledgeable teachers with the help of parents determine such goals at IEP meetings.

It’s important to remember, that with grit and high-stakes standards, including Common Core, children are not always setting their own goals. They aren’t dreaming of passing tests. They want to do well on them, or they fear them, because it’s what adults tell them to do. They’re being set up to please adults.

That’s a huge problem with grit and what makes it disingenuous.

There’s a lot of pushback when it comes to grit. My favorite is Alfie Kohn’s “The Downside of ‘Grit’: What Really Happens When Kids Are Pushed to Be More Persistent?”

Here is some of what Kohn argues:

It’s also interesting that Duckworth touts her research with students who have grit and participated in a spelling bee. While learning to be good spellers, and contests can be fun, there’s only one winner.

I think this demonstrates why grit doesn’t always get you to the promiseland. Much in life is competitive.

A student could practice the piano rigorously their whole life, have the best grit imaginable, but there’re only so many slots available at Juilliard.

Grit refers to flexibility, but it can leave children feeling like losers. They could see loss as their fault, believing they didn’t try hard enough, when it was simply luck!

Who Made the Pancakes?

In the almost wordless children’s picture book Pancakes for Breakfast by Tomie dePaola, a woman who lives on a farm, jumps over obstacles to make herself pancakes. She dreams of them. But in the end she fails.

Then she smells the pancakes her neighbor is making. She invites herself to their house, makes herself at home. She finally gets pancakes.

The last picture shows her sitting under a sign. “If at first you don’t succeed, try, try, again.”

The thing is…she failed. In the end, she quit! It was her neighbor who succeeded in making pancakes.

There’s a message there about grit, but it’s not so clear the kind of grit the woman had.

Duckworth tries to simplify grit, but it isn’t simple at all. Children need to understand this. That trying to achieve one’s goals is a good thing, that you should get back on the horse if you fall off, especially if it’s something you really want.

But also, if you don’t like where you’re headed, perseverance isn’t going to necessarily make it better. Sometimes the best thing you can do is quit.

Other times, you can struggle to reach the goal, but through no fault of your own, it’s unreachable. You’re likely not to blame, and even if you are, there are always other avenues. You can always move forward to something new.

Mistakes and giving up are sometimes O.K.

Kids need to know that too.