The annual costs for new computers and technology (STAT*) is now $57 million, and over $250 million overall is expected to be spent by 2018.

In its massive diversion of funds towards technology, the proposed Operating Budget of Baltimore County Public Schools  does not address the great need of all students for more support staff, and subjects the existing School support staff to ever more crushing workloads.

According to one administrator at a recent Board of Education meeting, the BCPS 2018 Operating Budget is “sufficient” in supporting administrators and offices working with students in poverty.  Another stated that there were backpack programs feeding children in schools.

But the school system does not fund weekend backpack programs.  The current backpack programs feeding children at risk of hunger on the weekends are funded privately; they only feed a few hundred children in the system and reach a fraction of those in need (there are over 32,000 children identified as food- insecure in Baltimore County).

The 44,000 children in the school system currently qualifying for Free Meals live in families with  incomes at 130% or below the federal poverty level, which for a family of three is about $26,000 a year.

Over 52,000 qualify for both Free and Reduced Price Meals, nearly 47% of all students.  The poverty level is actually higher, given the high cost of living in Maryland.

While there are 53 Title I Program Schools in the system, there are over 90 schools in BCPS with poverty rates of over 50%.

The administrators made no mention of support services for non -Title 1 schools with extremely high poverty rates.

The belief of BCPS administrators that Student Support Services can adequately assist students in poverty, indeed all students, is not accurate given the recommendations of the national professional agencies cited below.

The BCPS answer below to Board members sets out disturbingly inadequate ratios of support staff for students. Here are BCPS guidelines in response to a question from Board Members on hiring more guidance counselors. 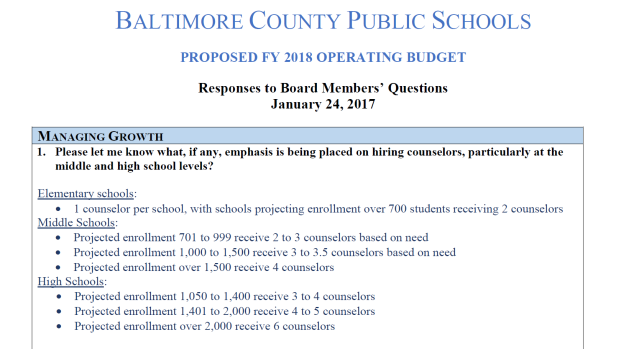 Guidance Counselors: The American School Counselor Association (ASCA), recommends a ratio of 1 counselor for every 250 students. Compare with BCPS ratios outlined above:

For social workers, the ratios are much worse.    With only 74 full time social workers in BCPS last year, the overall ratio is 1:1501 students.

The American School of Social Work recommends one social worker for every 250 students:  “Staffing at a higher ratio than the maximum recommended by SSWAA compromises the quality of services provided to students and affects the potential for positive academic outcomes for all students.”

BCPS has only 39 full time Pupil Personnel Workers (PPWs) for all 167 schools, with most workers serving in multiple schools, a statistical ratio of 1 to about 2,800 students, with much higher ratios at some schools.

Each PPW has huge responsibilities, including attendance issues, evaluating  and enrolling students who are homeless or in hardship situations, social, emotional, and behavioral problems, supporting other school personnel working with students, re-entry after hospitalization, and referrals for families needing community assistance.

One PPW was assigned to three schools, with a total enrollment of about 4,500 students.

For many children, poverty affects every second of every day.

From my experiences with private assistance programs, we know that children might begin the school day hungry or have no money for lunch. Others do not have underwear, socks, toothpaste, or deodorant; some have no sheets, or even beds. Some families have asked for toilet paper in interviews with school staff on their needs.

Poverty and its stresses also have a devastating effect on being prepared for graduation.

When I participated in mock interviews for seniors at a high school last year, five of the students I interviewed had failed most of their classes in high school. They had been in and out of crisis and economic hardship the entire time. While their speaking skills were good, they could not write well, could not spell, and had never put together a resume, and they were less than seven months from graduation.

What will happen to them? We need programs, based on the needs of individual schools, to help impoverished students from the moment they arrive in high school until they leave the system.

Homeless students also need many support services; there were over 2,500 students identified as homeless in the system last year.  To fund these positions would eventually cost about $16 million dollars annually.

The annual costs for new computers and technology (STAT) is now $57 million, and over $250 million overall is expected to be spent by 2018.

The staff positions proposed above could be funded by reducing STAT costs by just $4 million dollars a year for the next five years and then and in subsequent years to maintain these positions.

The costs for additional staff described above must be compared with the costs of STAT and administrative costs, and the fact that these positions have been underfunded for decades. These positions fill existing needs that are not being met.

It remains to be seen what the Baltimore County Board of Education will do with this information –they will vote on the budget in February.

Laurie Taylor-Mitchell, a former Professor of Art History at Hood College in Maryland, is a co-founder of Advocates for Baltimore County Public Schools, and founder of the Loch Raven Network, a non-profit group assisting students in need at her son’s former high school in Baltimore County. laurie.lochravennetwork@gmail.com

STAT-us-BCPS A grassroots education coalition working to slow down the high-tech takeover of Baltimore County Public Schools. Check it out and give them your support!

Is the Digital Conversion of Baltimore County’s Schools a Worry for All Schools? By Joanne C. Simpson